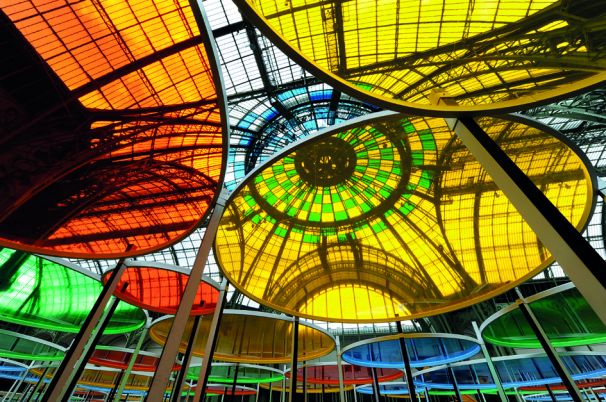 The Grand Palais in Paris hosts each year monumental works created specifically for the event “MONUMENTA”. One internationally renowned contemporary artist is invited every year to appropriate the 13,500-square-metre Nave of the Grand Palais with its stunning 45-metre glass vault.

For this edition, French artist Daniel Buren comes after Anish Kapoor who wowed over 270,000 visitors last year with “leviathan”, a four-chamber balloon bathed in red light.

Daniel Buren in situ work invites visitors to evolve through a set of colours and sounds spanning the immensity of the setting. Daniel Buren tells us more about “An architecture based on the circle” in an interview with Marc Sanchez to discover on MONUMEMTA’s website:

« The breakthrough came when I finally realised that this iron and glass architecture was based on the circle and the main tool used to design the building was a compass. So I made dozens and dozens of sketches. These drawings were the starting point for discussions with Patrick Bouchain and Loïc Julienne, and with Jean-Louis Froment, whom I had asked to help in the very early phase of the project.

Then after bouncing all these very different projects back and forth, we decided to take a decisive step and choose one of them, still in the early stages. I jumped in the deep end and the architects made a model so we could grasp the scale of the place, understand its gigantic proportions and try to see the relationship needed with the elements in my budding project.

That is when we decided on the proportions. The most important thing for me was the confrontation between a device placed quite low down – a sort of ceiling made of hundreds of clear, coloured circles – and the great height of the nave of the Grand Palais. I expected this extreme tension to emphasise not the hugeness of the building but its volume, left as empty as possible. As if to give shape to the air circulating in it.” 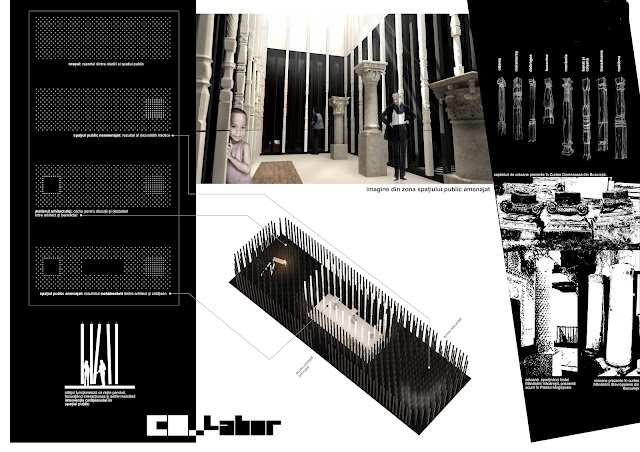 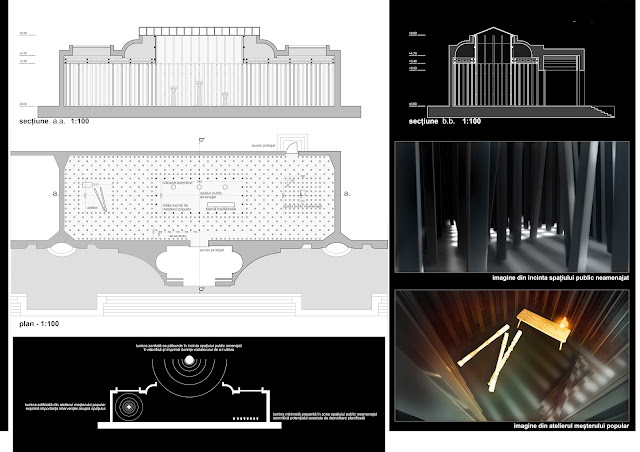 Starting from the artisan’s tradition specific to all the historic areas of Romania, manifested in the vernacular architecture and passing through centuries of influence due to the geographical position of the country between the Orient and Occident, we shall present one of the recurrent elements and in the same time sensitive to all these factors mentioned above as an exponent of the promotion of architecture.

The wooden pole, reference of the area in which it ennobles architecture, it is the work of art of the anonymous artisan, keeper of the local tradition.

We consider the column as being the equivalent of the wooden pole in the cult architecture. Also left without an author for many times, it completes architecture starting by reinterpreting the traditional elements and by borrowing the influences from Occidental and Oriental cultures.

The idea of Common Ground which we are analyzing in our presentation is developed on several main levels:

1. The first one, easy to decipher, is the one determined by the historic time and tradition, the evolution from the wooden pole to the column.

2. The second one is the one of the influences caused by Romania’s history and geography in the European context.

3. The third one, much more subtle but interactive, is the connection and the continuity between what should be the adjusted urban public space and the unadjusted one.

A common ground in the European history identified by us, the rustic houses, are particularized in Romania due to materials, construction techniques local needs and through sculptural details specific to each historical area. We choose to present a series of wooden poles (symbolizing the buildings of a city) which should generate the village hearth (the public space). These ones are a replica on a scale 1:1 realized by traditional techniques, painted in white. They will be representatives for the ethnological areas of Romania (Muntenia, Dobrogea, Moldova, Bucovina, Maramures, Transilvania, Banat and Crisana, Oltenia).

Another common ground consists of the popular dowry on which oriental and occidental influences are superposed. These ones are manifesting themselves in different proportions. The influences will be represented by columns on a large scale borrowed during the exposition from their original sites (for example: The Voievodal Palace from Bucharest, The Voievodal Palace from Târgoviste, the Monastery of Văcăreşti – The Palace of Mogosoaia, Dealul Frumos etc).

Connected by the city, the public space in itself will be defined by us through a hierarchy of enclosures. We are using an allegory: the wooden pole_building and, inclusively, the interior of the pavilion_public space.

The wooden poles put into an amorphous table inside the pavilion simulate the relationship between the buildings and the public space, the city. The wooden pole has the property to be semi-mobile, through suspension (pendulum).

By a voluntary or involuntary movement made by users upon the wooden poles, the public space is being modified. We want that the visitor realizes his power to inform himself and to take part in the improvement of the public space.

We represent the chaotic evolution of one area, by agglomerating the elements. The densified surface of this one represents the essential disorganized public area. Through density we create an inaccessible point. The illumination will be minimal.

The citizen, together with the architect, generates and personalizes the public space and they take together a decision for a better functioning of the city. This creates an opportunity for a dialogue and public debate, metaphorically represented by the artisan’s workshop which sculpts the wooden poles during the visiting schedule. Interacting with him may bring new results in a direct relation with the desires and the needs of the user. The light is punctual, artificial.

The result of the collaboration is the organized public space. In this pavilion it exists through the central void plated by the white, sculpted wooden poles, the product of the work of the two partners. An important role is given to the zenithal light which valorizes the space. '' _George Birsan_co author at co_labor


Note: The project co_labor won the second prize at the competition for the Romanian national pavilion to be presented in Venice during the Architecture Biennale of this year.


The project is a result of the collaboration of: George Birsan, Costin Ciungulet and Cristina Dumitrache.


George Birsan is a Romanian architect.He currently runs his own studio in Brașov, Romania. The website with his work will be available soon.
Posted by Lab'process at 2:18 PM No comments:

We're going further with the installation that we will present together with bozin szekelyarchitects at Palazzo Bembo as part of the exhibition “Traces of centuries and future steps” within the official program of the Venice Architecture Biennale 2012.

And we invite you all to discover more about our project on our website:

Taking part to such an event is a great opportunity and honor and a unique opportunity for us to present our work and vision as designers and architects on an international stage to an international audience composed of professionals from the world ofarchitecture, design and art, as well as the general public.

To realize this project as we imagined it, we need your help: to finance this project, we are currently working on a limited edition ofexclusive products to discover soon on opus caementitium’s website. We also appeal to your generous help by visiting and donating on our page:

Your support is a great help for us. Thank you for helping us also by sharing our pages !
Posted by Lab'process at 3:50 PM No comments: 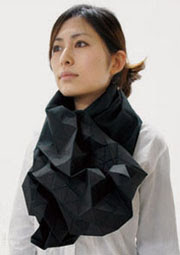 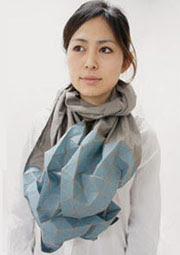 We have recently discovered the interesting Japanese brand monomatopee.Their designs are inspired by the art of origami and we find them very interesting. The Baloon sole is by far our favorite. Made out of 100% cotton, the stole  changes into "feeling like paper" once processed and offers a multitude of 3d shapes combinations for wearing. A simple idea for a great accessory! 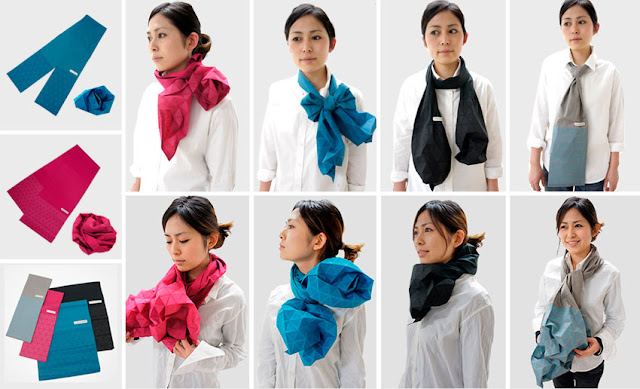 Posted by Lab'process at 4:06 PM No comments: 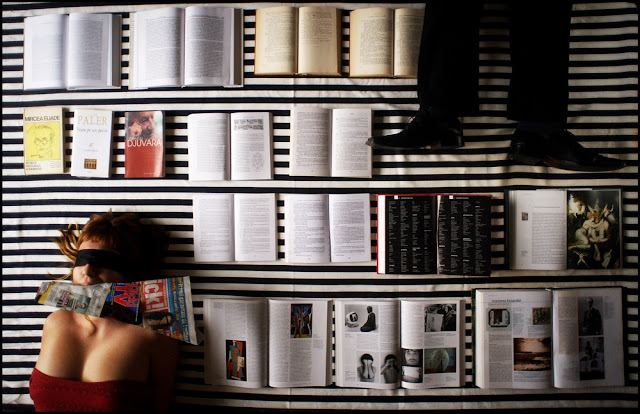 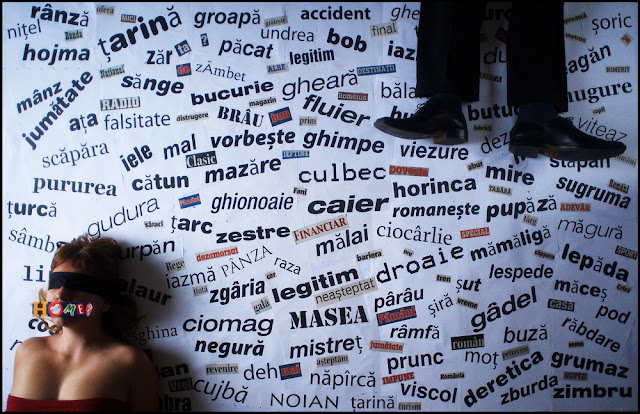 ''When we think of Pop Art we think of  contemporary society and culture, particularly consumerism. What does Romanian society consumes nowadays?

Due intensive/aggressive advertising, contemporary Romanian society prefers to consume the illusion of a perfect product instead of using and recreating the original values of the Romanian people.

Thus the constant unbalanced conflict between the temptation of asking from divinity instead of using the tools within reach to achieve the desired aspirations,  junk-food versus traditional food, trash culture versus authentic culture, intrusive foreign languages versus mother tongue,  the attraction for the foreign symbols lead towards loosing the
national identity.''_Simona Sterca 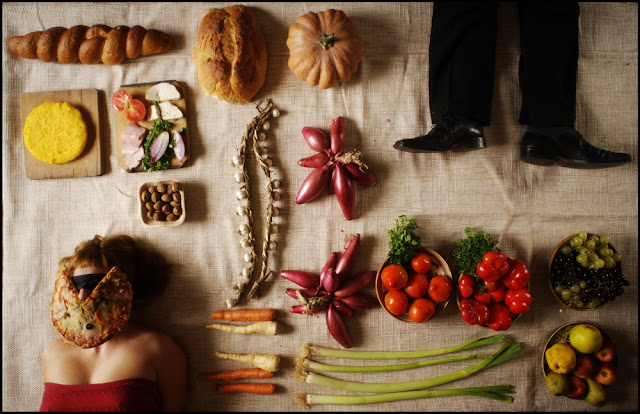 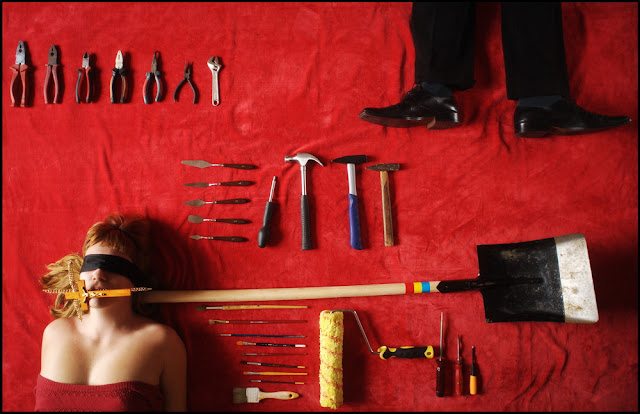 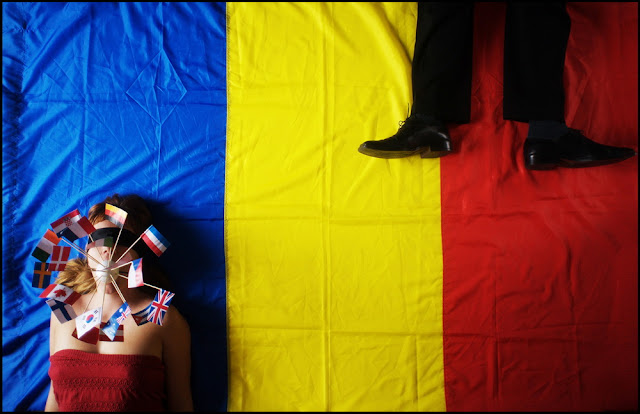 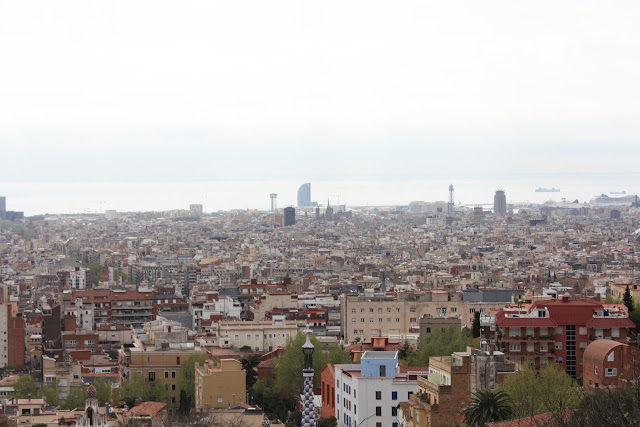 Discovering a new city is always really exciting, especially when one is taking the time to visit a culture loaded city such as Barcelona.

Barcelona is a mix of sunny Mediterranean charm and  European urban style. From Gothic to Gaudi, from Mies van der Rohe to Herzog and De Meuron, the city is bursting with architecture and art; while the Catalan gastronomic highlights are between the country's best. Sunny beaches are spread along the city cost tempting the sun seekers, while charming wine and tapas bars are just inviting anyone who's passing by to enjoy the moment and meditate.

''From its origins as a middle-ranking Roman town of which vestiges can be seen today, Barcelona became a medieval trade juggernaut.Its old center holds one of the biggest concentrations of Gothic architecture in Europe. Beyond this  are some of the world's most bizarre buildings: surreal spectacles capped by Antoni Gaudi's Sagrada Familia.

Barcelona has breaking ground in art, architecture and style since the late 19th century.From Picasso and Miro to the modern wonders of today, the racing heart of Barcelona has barely skipped a beat.Equally busy are the city's avant-garde chefs, who complete with old time classics  for the gourmet's attention.''(source lonely planet guide)

Barcelona is the city of textures and food perfumes and delights, perfect for long walking tours, for culture, art and architecture lovers or gourmands. It is a city that has something to offer to any type of person who is ready to discover it... 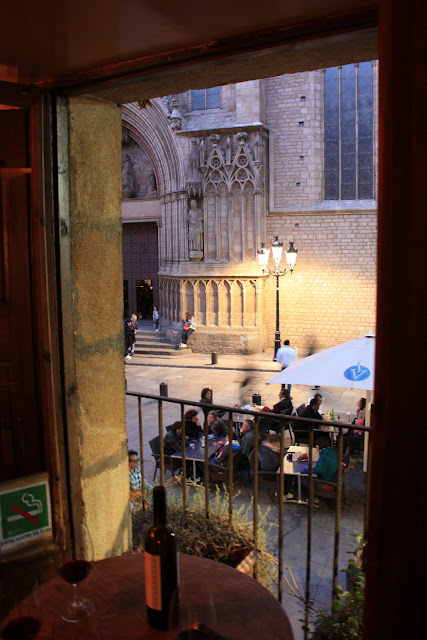 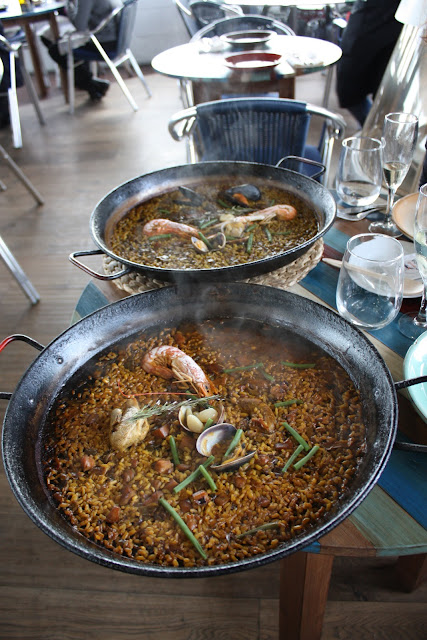 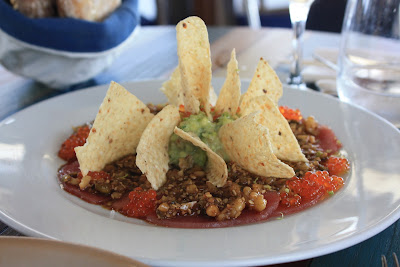 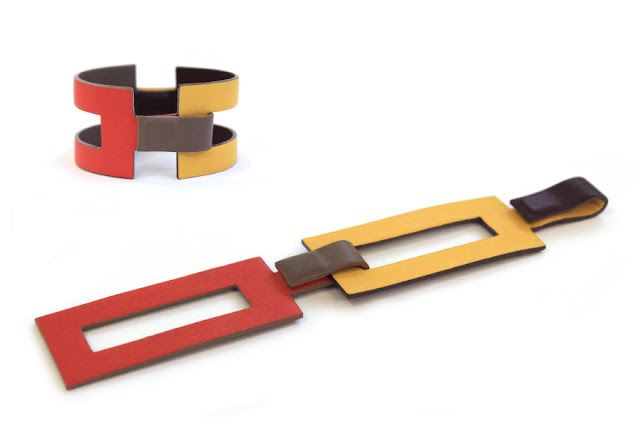 We recently discovered the work of a young French designer in a boutique in France. The artistic world of Camille Roussel can be defined as a fine poetic balance between lightness of Origami and strength of geometrical lines.

Fascinated by the art of leather craft, she created her brand of fashion accessories and objects in 2011 after her studies in Object Design at The Arts Décoratif in Paris.

The result is surprising: the colorful and fun design of her bracelets is based on the principle of the “link of the chain”. The different leather modules can be combined together to form a chain. Each module is reversible, adjustable and interchangeable, offering several combination possibilities.

All items are handmade in limited edition in Camille’s studio in Montreuil and her models can be discovered and ordered on her blog: http://camilleroussel.blogspot.fr/

But as a picture is worth a thousand words, here are some models that Camille was kind enough to share with us for this article... 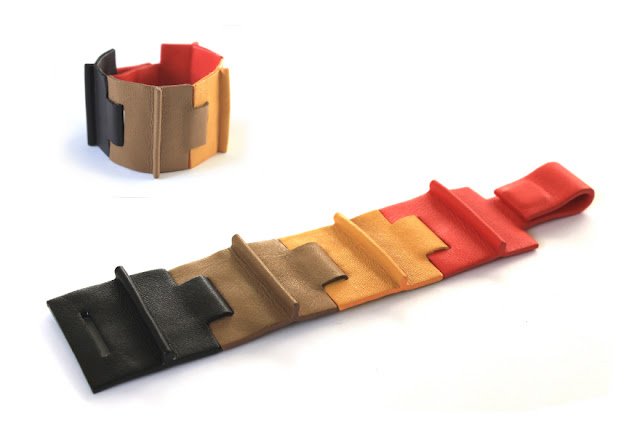 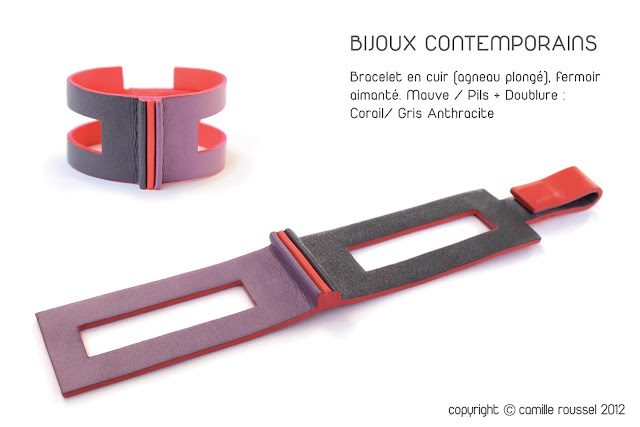 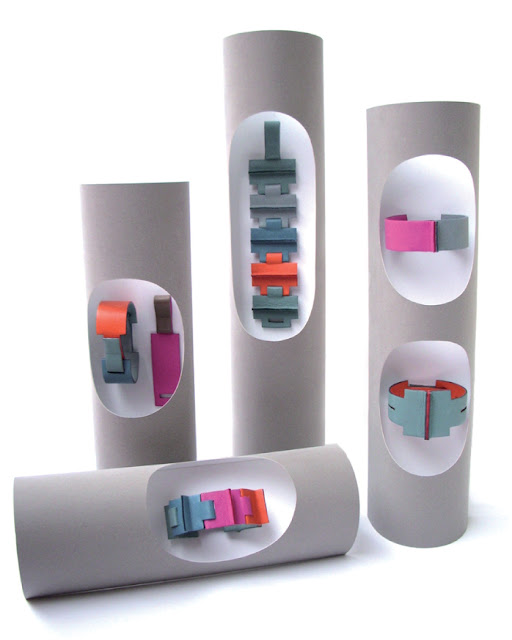